A police officer has been found dead at his duty post in what is suspected to be an unnatural death, barely 24 hours after another officer was allegedly killed by suspected armed robbers.

The officer, Lance Corporal Alhassan Asare, was said to be on duty at Dukes Petroleum Filling Station at Akim Swedru when his death occurred. 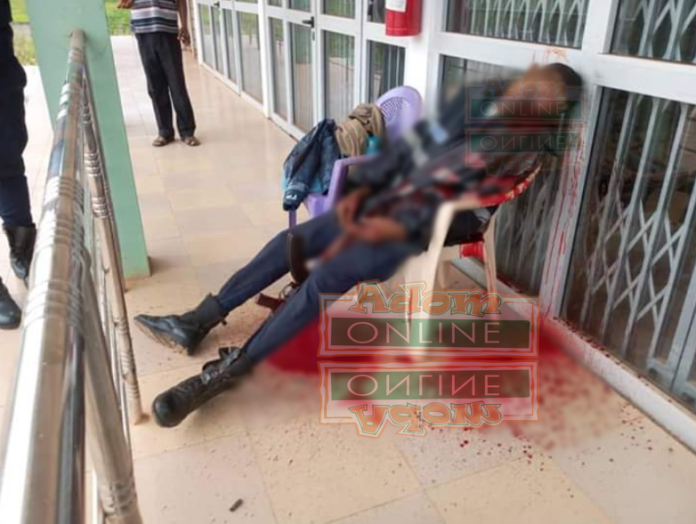 According to a police signal in the possession of adomonline.com, Lance Corporal Asare’s body was found by a colleague police officer, Lance Corporal Eugene Songoti Abaah, sitting in a plastic chair on the ground floor of a storey building with his rifle in between his thighs.

Lance Corporal Abaah, who said he was at the filling station to buy fuel but decided to check on his colleague officer, phoned a police station to report that at the time of seeing his colleague, he had sustained severe gunshot wounds on the head.

The body was found at about 5:40 am Tuesday morning with Lance Corporal Asare’s uniform soaked in blood.

According to the police signal, three empty shells were found on the ground near his body.

This is the second police officer killed within 24 hours as another policeman was allegedly shot dead by armed robbers at Manso Abodom Dome in the Amansie West District of the Ashanti region.

Information gathered by Adom News suggested that the incident happened around 5:30 pm on Monday while the deceased was in the company of suspected Chinese miners.

A Plus blasts NPP; calls them ‘liars’ and ‘wicked’ people

Don’t let politicians deceive you ahead of December…