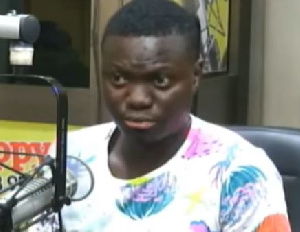 One of Ghana’s most controversial spiritualists, Kweku Peprah, popularly referred to as Lucifer, has revealed that any individual who claims to be a repented occultist is a liar.

According to him, there is no occultist on this earth who has repented, hence anyone who comes out to confess to repenting from occult is telling lies probably because he or she has been paid to, or for some benefits that he or she deems worth it.

Explaining why occultists cannot repent, he said, “When you join the occult, the money and enjoyment that comes with it is so much that you won’t even have time to repent. That is where the light is but Christians see that to be the darkness”.

He made this revelation during a live studio interview on Ghana’s number one religious and social programme ‘Nsem Pii’, which airs every weekday on Happy98.9FM. Per his knowledge, occult means hidden secrets and all that occultists do is dig hidden secrets and benefit from them.

Lucifer also stated that being a traditionalist is not a bad thing, however, people have been made to believe that it is a sin but it would only be right if people get closer to others who practice the religion and find out for themselves whether or not their ways are right.

Sekondi Area of the Church of Pentecost launches ‘Agent of Peace’

Every progressive country should choose job and wealth...

Ewes and Northerners are good in bed no matter their manhood...

Here’s why some women like to depend on men

Moesha Boduong Is My Bestie – Gambo Discloses In Latest...

Videos: Ewes and Northerners are good in bed no matter...

I quit my job to do music – Ama Nova