“My brother had a terrible dream in which he was hit in the leg with a stick. Not long after that, he became paralyzed,” these are the words of Boakye Joseph, the senior brother of two physically challenged orphans.

Joseph who hails from Tepa in the Ashanti Region of Ghana said his two younger brothers who are orphans could not walk again due to mysterious happenings.

He said his parents used to help in catering for the well-being of the two children but they have unfortunately passed away.

“Our parents were not having enough but they did their best to take care of us and also prayed for us till our mother passed away in 2015. In 2019, our father fell ill and was sent to the Tepa Government hospital but he never responded to treatment till he also died.”

Joseph reveals how difficult life has been for him as he has to single-handedly take care of his two younger brothers who are currently paralyzed.

“They cannot do anything on their own so I have to help them in cleaning themselves since they are paralyzed. I still have to work hard so that there will be enough food and money in the house,” He said.

When crimecheckghana spoke to Owura, the elderly among the sick brothers, he disclosed that he had a terrible dream which led to his paralysis.

“I had a dream and I was hit in the legs with a stick. Later in the day, I fell when I was on an errand and since then I have never been able to walk again so I had to drop out of school because of my current condition.”

The younger brother, Yaw, also gave his account on how he became paralyzed. “It was closing time at school so I was running with friends to join the closing parade. I felt dizzy and fell. That was the last time I was able to walk. I have been paralyzed for 3 years now”.

The brothers are appealing to the public to come to their aid so they can get proper medical care.

The Executive Director of Crime Check Foundation, CCF Mr. Ibrahim Oppong Kwarteng has therefore appealed to Ghanaians to help support the children who have no one to turn to for help. 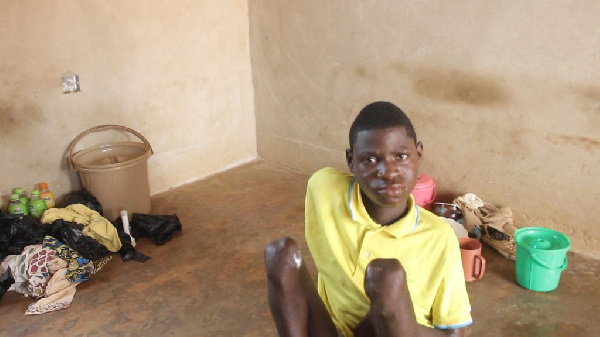 The CCF Health Check Series provides financial support to those detained in hospitals because of their inability to settle their bills.

It also solicits support for many others who are not able to have access to proper medical care and also require surgery, but are unable to foot such bills due to poverty.